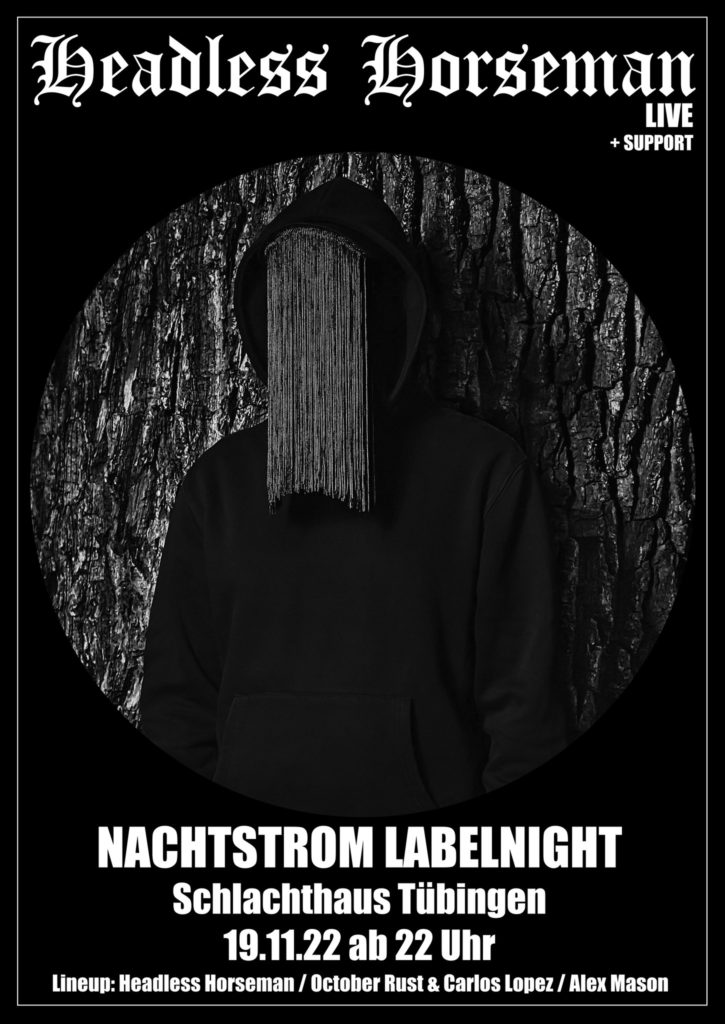 Lineup:
HEADLESS HORSEMAN (Nachtstrom / 47 / Aufnahme + Wiedergabe)
OCTOBER RUST & CARLOS LOPEZ (Nachtstrom)
ALEX MASON
>>> From the shadows to the stage, Headless Horseman’s musical efforts are meticulously executed without compromise. The eponymous Headless releases sum up the modus operandi of this artist: dark, raw and rhythmic IDM flavoured Techno. His hardware only live sets at Berghain, Berlin Atonal, Boiler Room and worldwide have showcased the Horseman’s insurmountable skills as a producer and cemented his place in todays techno scene. For the first time in Tübingen, we are really excited to present you the Headless Horseman at the Schlachthaus as headliner of our Nachtstrom Labelnight in November. Get your dancing shoes ready and prepare for some serious dancefloor damage. Musical support will be coming from Nachtstrom labelhead October Rust, Carlos Lopez and Alex Mason.

# Geargrind
Geargrind extemporises electronic music, live, with only little preparation before each show, which makes every performance unique. No software is involved in any of his shows. Instead, he uses digital and analog instruments to create a sound that oscillates between spheric-synthetic ambient sounds and hard acid trance.

# Michael Hollingshead
„The Californian born ambient experimentalist channels his roots in the reverb drenched garage and surf rock west-coast soundscapes of his youth, combined with lush cycles of deteriorating and pulsating sound loops- a marriage of tones peppered by the surfy punk rock guitar of East Bay Ray to contemporary ambient endeavors like Portland based ambient artist Amulets“